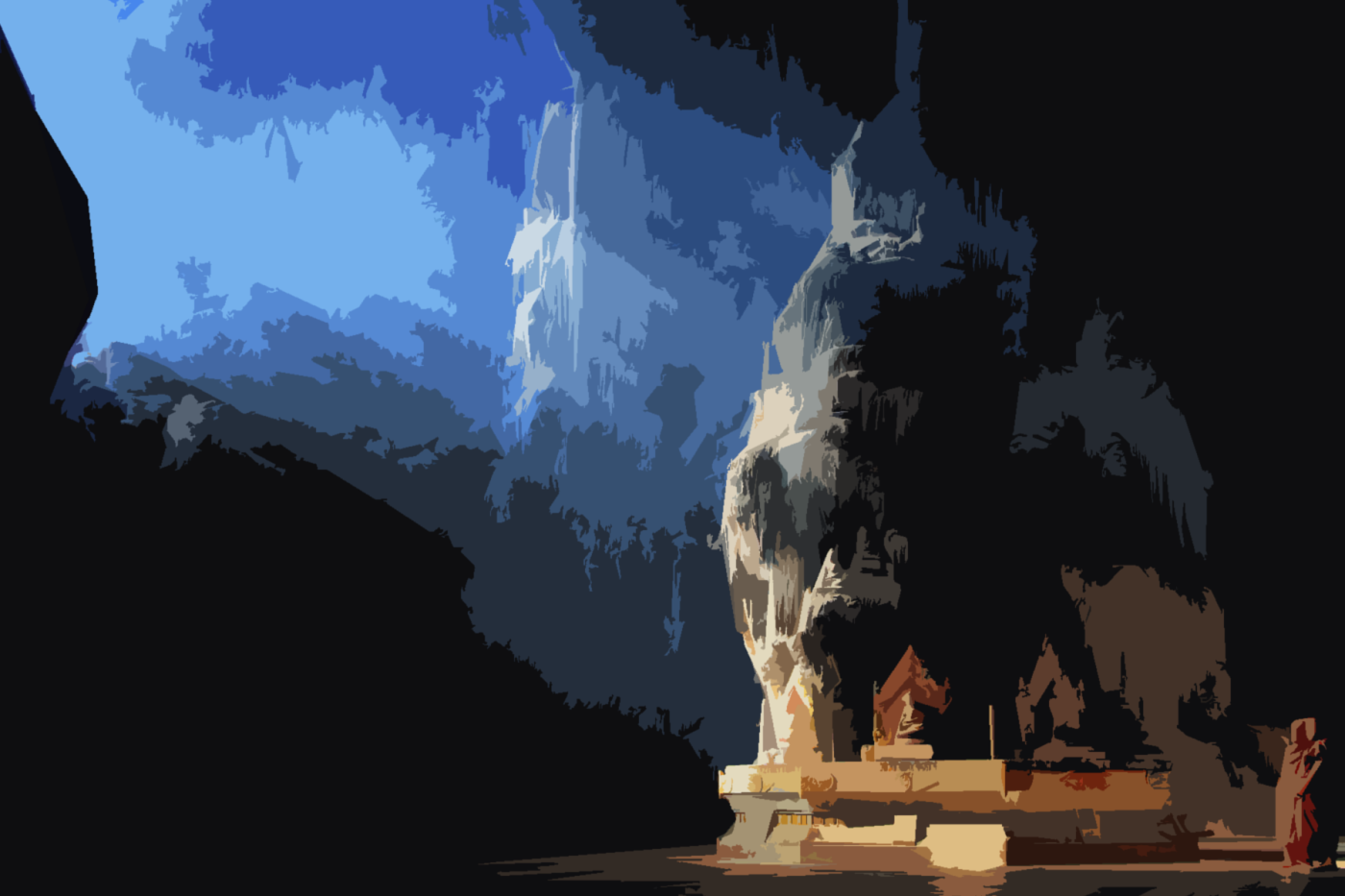 Grace was six years old when her attraction to the river finally overwhelmed her. Her mother, Jane, had only turned her back on Grace for a few seconds, but in those moments, her little girl with the auburn locks and in her favourite red dress silently skipped to the water’s edge.

Jane felt a change in the air, and as a gust of wind rushed by. She turned expecting to see her daughter playing in the field of flowers that surrounded their modest cabin. Instead, she only saw that the water had awoken from its slumber, with no sign of Grace.

Fear shot through her, and panicked she raced towards the river assuming that the reason there was excitement in the water, was because Grace had immersed herself in there. She silently scalded herself for having her back turned, with her hands on her head in shock. Resolutely, Jane was waist high in the river searching for any sign of her baby girl, screaming her name so loud and hard, that her lungs burned angry.

After a while of waded through the river, Jane managed to finally drag herself out from the water as she tried to think of any other explanation. Maybe she went exploring in the forest, it was possible that she went chasing after a butterfly or something. Never stopping for a second, she went over the threshold of the river and into the woods.

When she finally returned home the sun was setting, and her body and clothes were bloody and soaked through, but still Grace wasn’t anywhere to be found. Jane went straight to the phone, dragging mud through the house to call Johnny.

Frantically, when the phone connected, Jane could hardly contain her hysteria, “SHE’S GONE JOHNNY. I TURNED MY BACK FOR A SECOND AND THE WATER AND THEIR WASN’T ANY SOUND, IT WAS SILENT, JOHNNY. I SEARCHED EVERYWHERE, AND I JUST, SHE MUST HAVE WALKED INTO TOWN OR SOMETHING, RIGHT?! SHE’S NOT GONE, she’s can’t be gone…”

Johnny told her to calm down and stay put until he got there, which she chose to ignore. Instead, Jane went outside, down by the river, and fell to her knees calling Grace’s name, just in case she had only gotten lost and needed to find her way home. But calling quickly turned to screaming, which eventuated to sobbing crumpled on the ground.

It didn’t take long for Johnny to arrive, and when he did, he picked Jane up, took her inside, dried her off and cooked her a hot meal.

Jane hadn’t said a word to him, but was just blankly staring into space while pushing the food around on her plate without ever actually eating. After a while, Johnny cleared his throat, “You know I love you Jane, but you have to stop doing this…It’s been ten years.”

Jane darted her gaze to Johnny, “What are you talking about? It happened today. I was out gardening…and then…and Grace was playing…and then she wasn’t laughing anymore…and I just tried to find her…but she isn’t anywhere, I mean I looked everywhere…”

“You’re right, that did happen. But it has been ten years since Grace disappeared. Ten years. You have to remember because that day you called me as well, but first you called the police who searched for days for any sign of her, but they found nothing,” He was patient with her, obviously the years treating him as an expert on days like this.

Like every time before, Johnny watched as realisation crept in and he slept on the couch overnight to make sure she was alright. When he woke in the morning, it was from the sound of the front door closing.

He sat up and rubbed his face before walking outside to see Jane standing by the river. Her eyes were closed, and as he neared, she turned, faintly smiled without meeting his eyes, and handed him one of the coffees she was holding.

“Thank you, for doing this time and time again…I know I’m a burden,” Jane was speaking to the air rather than to Johnny, but even so, he nodded and stood with her overlooking where Grace had disappeared without a trace.

She continued speaking with a tiny bit of hope in her heart, “You know, over the years, sometimes I’m out here and I think I see her. Not as a little girl but as what I imagine her to be as she grew up. I know it’s just wishful thinking…that maybe she’s out there somewhere. I still feel her in my heart, so it might be possible, right?”

Johnny didn’t answer, but stood silently with Jane as they watched the water flow.

Grace never meant to hurt her mother, in fact, the reason she left that day was to protect her, and she never in a million years thought it would consume her for so long. Hell, over the years she had even gone to check in on her, careful not to get too close.

She still remembers it like yesterday, the day when her life changed. It wasn’t like it was some dramatic realisation that she had a greater purpose. She had always had the dreams, she always knew that Jane wasn’t her real mother, that her name wasn’t Grace but Melody, and that the six-year-old body she was in, wasn’t exactly hers.

To explain in it to Jane might not have come across as believable, because Grace, or Melody as it were, was the miracle child that finally made it into her life. But Melody had chosen Jane because she thought it would be mutually beneficial, they could help each other however little time they had together.

Melody, or at least her six-year-old self, was actually a type of projection. She needed time for her allies to find the physical manifestation of what was essentially a rumour that could change the world, and she needed to hide while they searched. Otherwise a lot of people would have died, including herself along with a lot of innocents.

She grew up in a society within a society, a race of people hidden amongst humans. It didn’t take long for her to notice the gifts she had. The types of things half of humanity didn’t believe in, while the other half believed it was some sort of supernatural divination. The thing was, where Melody was from, she was just like everybody else in that respect which was relatively refreshing.

But when the war arose between those who believed humans were unworthy, and those who did not, Melody found herself in the centre of a heated conflict, despite her efforts to separate herself from the family legacy.

She was the last of her bloodline, and without thinking about it for much longer, Melody knew that it wasn’t right to try and eliminate an entire race. No matter what the old ways were, or what her father would have done if he was still alive, she refused to be that person, a mass murderer.

Melody, by default, was born with a lot of enemies, and without her blood, those wanting to do atrocious acts of violence were at a standstill. Day after day, she fought to try and save people who didn’t even know they needed saving, until one day, she read about an old temple on the outskirts of the ancient city.

Within the temple that had clearly been dominant for a long time, a sense of transparency overcame Melody and she knew that without sacrifice, or at least the illusion of sacrifice, the war would make every river run red with innocent blood.

The technology that existed for Grace’s people were incomparable to that of humans. However, even though the technology was advanced, the knowledge of how those technologies truly worked was lost on the new generation, and the elders from the old days could only teach so much.

It was in a secret room in the temple, only accessible through the blood that travelled her veins, where Melody found a device hidden. Glistening in the light lay a ruby encased metal box large enough to fit a body.

She had only read about this device once but didn’t know the appropriate name, assuming it was the device she thought. According to the old texts in the family vault, what was before her was what is referred to as a Chamber of Dreams. Within it, one’s consciousness could exist separately from the body, and could physically appear in another form.

While the true body and the mind were separated, the teleportation mechanism in the chamber could transport the empty body to a hidden location, and send the consciousness to whatever the user wanted to become.

It, like anything, had its limits. Only the strong willed could use it, and very few could actually pull their consciousness and body back together. The longer you were projected, the more unstable the device became, and the consciousness could get stuck in the projection, return prematurely to the body, or be lost somewhere in the ether.

It was the best plan they had, and they had no other options. It was the only way to buy time and not let her blood drip into enemy hands. After a day of preparation, Melody climbed in the chamber, closed her eyes, and when she opened them again, she was Grace.

Melody lived two years in the life of Grace. She lived through the miraculous adoption, and the love and care Jane showed. It broke her heart to leave her surrogate mother, but she could feel her real self slipping away, and even though she didn’t have any idea if the balance of the war had tipped, she couldn’t risk staying much longer.

From the minute she was projected, she had known the water was where she could break the link and return to her body, with Grace disappearing as though she was never there. She walked towards the river, taking one last look back at Jane, and with her mind cleared, Melody felt her essence being torn away like vacuum.

Without Jane, Melody would have never won the war. But in the process of saving many, Melody unknowingly sacrificed Jane, forcing her to relive the pain of losing her child over, and over again.